Commissioned by the City of San Jose Public Art Program in collaboration with
ZER01 and the 01SJ Biennial as part of a Creative Placemaking strategy for urban revitalization. 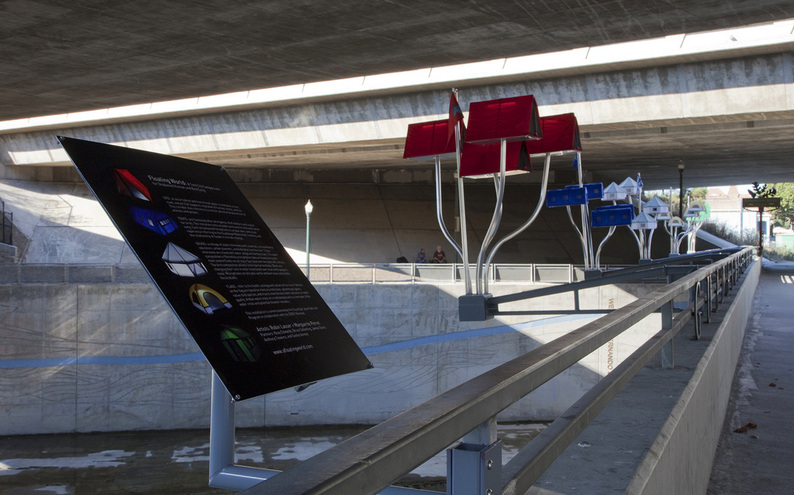 Twenty-one miniature tents were cantilevered off the bridge that spans the Guadalupe River at San Fernando Street in downtown San Jose, CA.
A Floating World is a series of “FEMA tents” for birds as a metaphor for the environmental consequences of city-building in environmentally sensitive areas. Channeling the river makes our downtown possible. It also impacts the survival of water-fowl as does building streets and a freeway over bird habitat. Each encampment includes unique audio components with bird song, human songs about water, ambient sonic works and scientists describing how the design of the flood control channel attempts to achieve this delicate balance as well as the impact on climate change on bird populations.

While flood control and transportation systems are essential to urban environments, we also need to be mindful of the consequences. A Floating World does not pass judgment on city-building efforts, nor does it offer a solution. Instead, it provokes a moment of reflection – its draws our interest by simply being a beautiful and unexpected artwork in an often-neglected space. Each time we experience it we will see and hear something different. Each time we experience it we will think about our impact on the world we inhabit.

Twenty-four miniature disaster relief tents were cantilevered off the railing gracing a bridge that crosses over the Guadalupe River at San Fernando Street in downtown San Jose, CA. The tents are built on stilts; the architecture is designed to protect occupants from the possibility of floods. The tent designs are fashioned after FEMA relief shelters, and are scaled for birds. Each tent interior contains a speaker or microphone and lantern. The tents are a conflation of human and bird design elements. They provide sanctuary or shelter for bird and human song, water compositions, and interviews with scientists who speak about the Guadalupe Watershed, birds, flooding, and the relationship of floods to climate change. 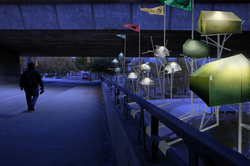 Floating World concept drawing.
The installation site embodies a niche: river, road and air that
support migration of humans, birds and fish. This corridor also
references a site for potential displacement of animals and people.
The site provides fertile grounds to explore the connections, balance and
adaptations that humans and animals make to our built world.

The tent designs are fashioned after emergency relief shelters and are scaled for birds. Each encampment contains a unique sonic experience. All the tents are illuminated by LEDs that make the tents appear to float at night.

The flags associated with each tent design also refer to the health, ecology and culture of the river. Patterns on the flag are based on mercury molecules, greenhouse gases, native bird species and macro invertebrates—indicators of water quality—and a blue water cross on a red background, a reminder of flooding danger and potential disaster relief.